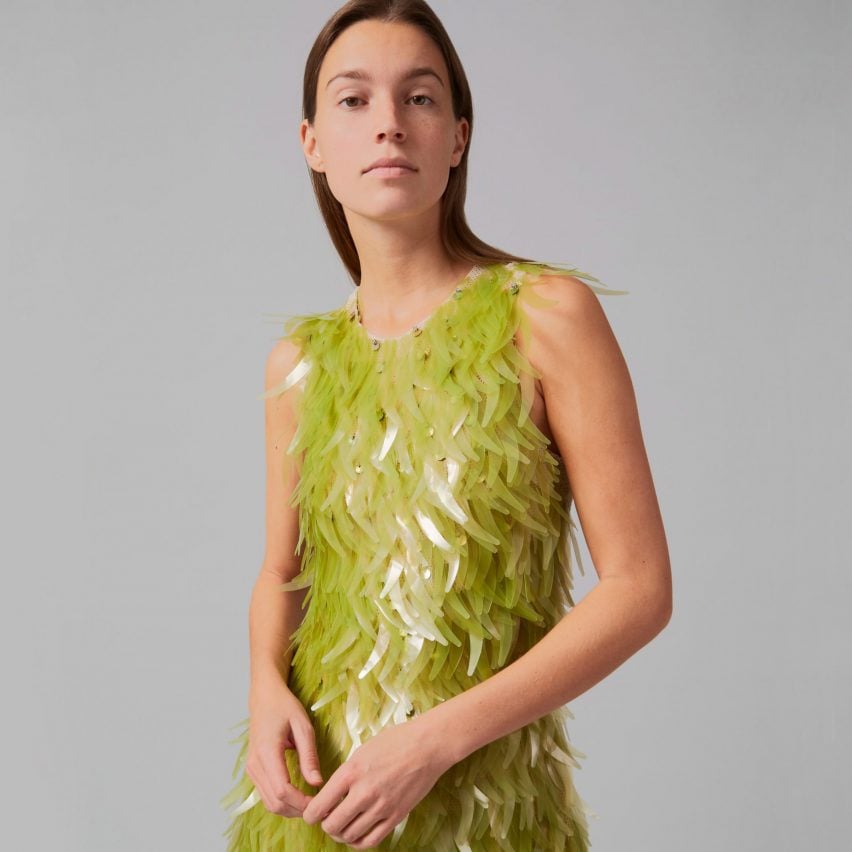 Algae bioplastic fronds are sewn onto a biodegradable base layer made of plant fibres. This makes the dress free of crude-oil derivatives such as synthetic fibres, dyes and plastic sequins, which have recently come under fire for the pollution they cause.

“Sustainability in fashion is not just about organic, natural or recycled textiles,” McCurdy told Dezeen. “If we’re going to get to zero on our emissions, we need to be thinking about how to replace the 60 per cent of textiles that are currently made of fossil fuels.”

The collaboration is part of the One X One project, an incubator that pairs high-profile fashion designers with sustainability innovators.

New York-based McCurdy has previously developed an algae bioplastic film made entirely of marine macro-algae, which removes and sequesters carbon from the atmosphere throughout its life making the resulting material carbon negative.

The challenge was to find a way to turn this experimental, non-woven material into a luxury garment for Lim’s fashion label 3.1 Phillip Lim. Since the bioplastic comes in the form of sheets rather than threads, the duo settled on sequins as the best application while simultaneously replacing a common plastic product.

“If you’re a designer and the rest of your product offering involves deeply, thoughtfully considered sourcing of renewable cottons and sustainable materials, the moment you go to make something with sequins you’re reaching for polyester,” McCurdy explained.

“The history of sequins is also really interesting because they originate from the practice of sewing coins to the body. They’re a way of holding your wealth close to yourself, which I think symbolically connects to this moment we’re in now, where we’re all grappling with feeling secure.”

McCurdy’s bioplastic sheets are created by exposing algae to heat, encouraging it to bind together before it is poured into a custom-made mould to cure and solidify.

To match the characteristic shine and stiffness of traditional sequins, McCurdy cast the material in a deeper mould made of glass that transfers its reflective finish onto the final product.

Cut out in a gently curved shape known as a tusk, the sequins create a ripple effect along the length of the A-line dress reminiscent of seaweed tendrils.

This impression is only enhanced by their translucent, ethereal green colour, which McCurdy derived from mineral pigments.

“The majority of our modern dyes and pigments are petrochemical in origin,” she said. “But we had a huge, rich vocabulary of colour before the Industrial Revolution that was not taking fossil fuel out of the ground, so I looked into traditional approaches to producing oil paints, which involved mineral pigments.”

Due to the ongoing coronavirus pandemic, McCurdy had to send bundles of sequins to the 3.1 Phillip Lim studio in the post, where the team attached them to a base mesh created by Spanish material research company Pyrates.

This consists of a cellulose fibre known as SeaCell, which is derived from seaweed and bamboo, while the delicate beadwork that emerges here and there from the sea of sequins is made from mother of pearl.

“We were inspired by shades of green and how photosynthesis happens, how light reflects and refracts,” said Phillip Lim.

“We imagined this whole ecosystem of marine life, from fishing nets as the fabric which the sequins would go on, to pearls and crystals inspired by oysters – deconstructing and reconstructing this ecosystem.”

At this point, there are no plans to make the garment commercially available beyond custom orders. Rather, McCurdy sees it as a “concept dress” that offers a vision of what a zero-emissions future could look like.

“My hypothesis about how these materials are going to drive impact at scale goes back to the history of solar panels. For 60 years they were a luxury but by being able to exist in that market, more research and development was able to happen, economies of scale developed and now they’re cost-competitive with conventional fuels,” she explained.

“Now, people who don’t even care about the environment are buying Teslas because they’re gorgeous and they’re fast. So through design, we can harness desire to paint a clear picture that a decarbonized future is aspirational and beautiful,” she continued.

“It’s not just a desaturated version of the present, it’s not just about reducing and getting smaller and sacrificing. It’s about transformation. And change is frightening but it’s coming one way or the other.”

The One X One programme has also seen streetwear label Public School collaborate with materials researcher Theanne Schiros to create a pair of trainers made from waste byproducts of the kombucha-making process.

Elsewhere, London designer Elissa Brunato was able to create a bio-iridescent sequin using cellulose extracted from trees, which naturally refracts light in its crystalline form, while Scarlett Yang used algae to create a dress that can decompose in water within 24 hours.