Meanwhile, designing for the psychological benefits of play — in addition to the physical ones — produces more inclusive spaces that benefit cities as much as they benefit citizens. As the success of the Cloud Forests pavilion at the 2020 A+Awards attests, this exciting shift in playground design is here to stay. Located inside the shell of an abandoned museum building in South Korea, UNITEDLAB’s Cloud Forests activates both the imagination and the body. Vibrant pink bars fill the open-air site between the smooth, concrete walls, and a white canopy of balloons floats above the brightly hued forest.

Spaced at varying densities, the rhythms of these pink bars can be intuited as prompts for running, walking or standing. A thin layer of aluminum wire suspends the bubbly stratosphere over the pink trunks so that when the flexible bars respond to physical touch, their movement is transferred to the cloud of balloons overhead. As a multi-sensory environment, Cloud Forests instead encourages children to activate their imaginations and to play with one another, with important implications for inclusivity. Suggesting that play is a mental activity just as much as it is a physical one, UNITEDLAB’s approach to playground design inherently accommodates “invisible” lived experiences such as autism or auditory or sight impairments.

Rather than determining fixed solutions for specific disabilities, such as the standard provision of wheel-chair ramps, this literally and figuratively open space anticipates the enjoyment of a wide range of different-abled bodies.

Clouds Forests was built in a museum that was abandoned mid-way through construction. A developer later purchased the concrete shell and commissioned the design. Ringing in at only $4000 for its design, installation, and first six months of maintenance, the playground is not only a low-cost proposal for community engagement, but it also re-invigorates the notion that public art can serve as a place-making strategy. Though initially intended as a space for the local community, the eye-catching design drew visitors from all around Korea to the small town of Hwaseong-si. 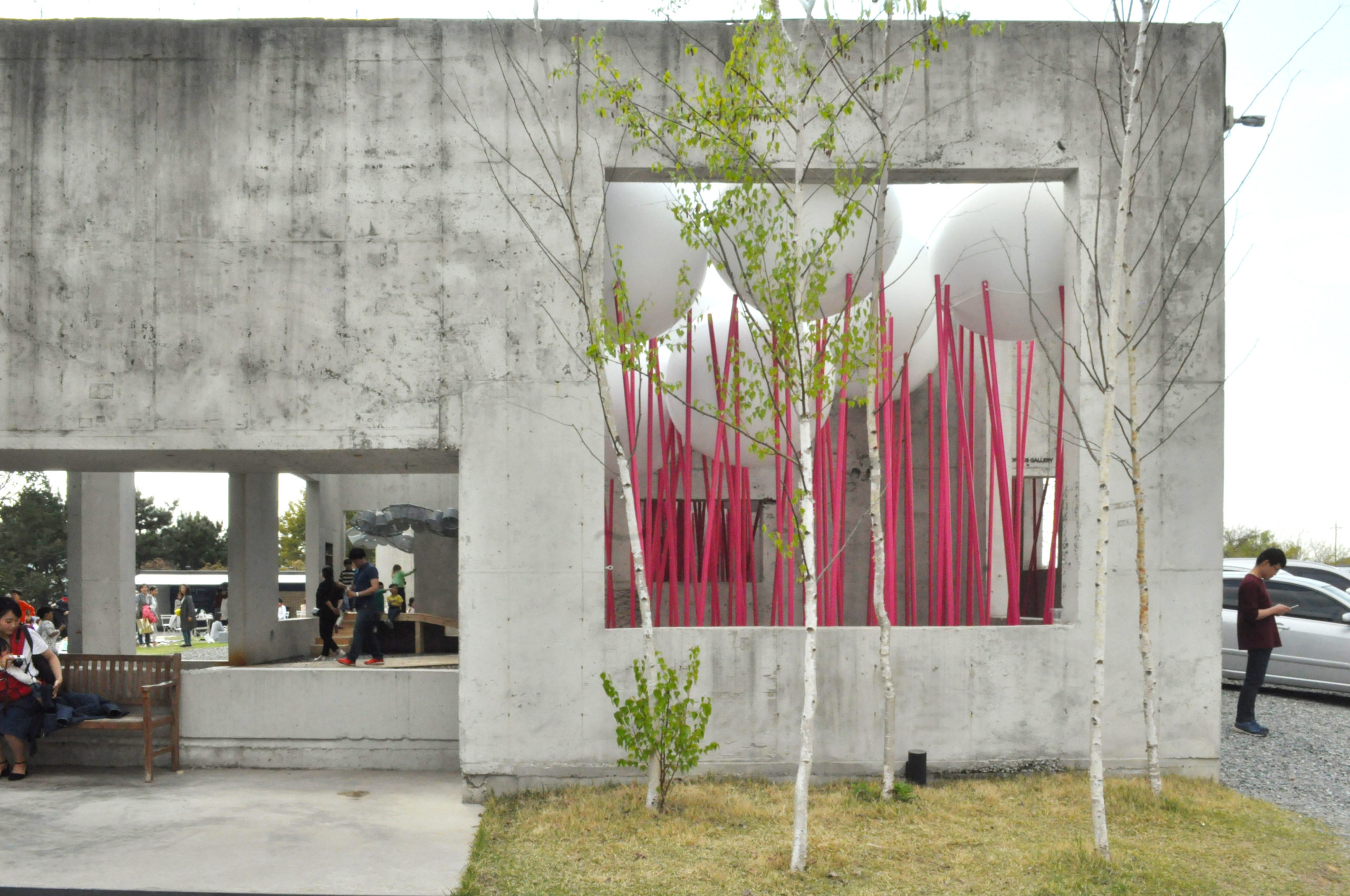 Insightful parallels can be drawn between UNITEDLAB’s approach to playground design and that of postwar architect Aldo Van Eyck, a co-founder of Team X and worked as a designer for the city of Amsterdam throughout the 1950s. Focusing on defunct squares and derelict parks, often seen as “in-between” or “interstitial” spaces, Van Eyck believed that playground design must be woven into the urban tissue, not patched on top of it. The 700+ playgrounds he built throughout his career demonstrate that provisions for play can also revitalize public space.

Drawing on the Dutch historian Johan Huizinga’s contention that play is a fundamental building block of human culture and society, Van Eyck’s non-hierarchical and minimalist approach to playground design was dually aimed at social and urban improvement. From the architect’s perspective, leaving play space open to interpretation would stimulate users’ imaginations, teaching them to adapt, socialize, and gain independence; at the same time, encouraging users to appropriate the space was also an inherently democratic approach to city design. Between the physical limitations, political instability, and emotional stress brought on by the pandemic, 2020, more than any year before it, has demonstrated our need to expand the purview of play. Adults who have been bound to computer screens and limited in social interaction are equally in need of a place to step outside of routine and exercise their imaginations. Oscillating between art space and play space, the pink trees of Cloud Forests appeals to people of all ages; the design asks us to consider playgrounds as multi-generational places, and necessary parts of public space.

In the coming years, we can expect to see a broadening range of approaches to playground design that target repetitive experiences and generic structures. In so doing, designers like UNITEDLAB will ask us to reconsider cultural assumptions about play in three significant ways:

By engaging with these three themes, Cloud Forests affirms the social value and democratizing potential of designing our cities as places for play; the project’s success in the Architecture +Learning and Architecture +Community categories sets a high precedent for playground design in the years to come.

Architects: Showcase your next project through Architizer and sign up for our inspirational newsletter.