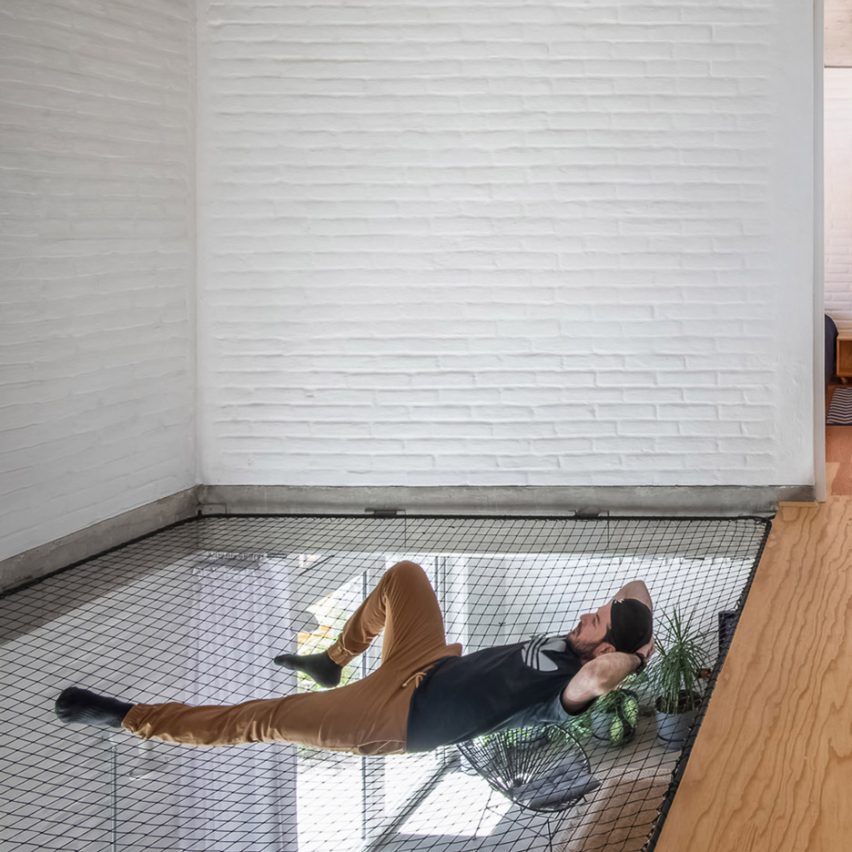 Local firm Fábrica de Espacios built the house in Bosque Sereno, a housing complex in the city of Aguascalientes in Mexico.

Pared-back in its design, the house features simple elements such as nude concrete floors and white-painted exposed brick walls in place of traditional materials like plaster and polystyrene, which also keep the house cool.

Handcrafted mosaics and terrazzo also feature in Casa Bosque Sereno, as well as natural wood, which Parades described as a celebration of traditional local craftsmanship.

The blending of indoor and outdoor spaces is a theme that runs throughout the house’s design which is defined by open-plan elements, in particular, a floor that is partially made of net.

“A textile net allows communication between two floors, while also acting as a big hammock for the family to watch a movie on,” explained Parades.

With rooms that can be opened out or made more intimate depending on preference, the house is both spacious and cosy.

Referred to by Parades as a “refuge,” Casa Bosque Sereno is also designed to conserve its energy by keeping the house warm in winter and cool in the summer through a solar chimney and double-glazed windows.

“The shading elements were calculated based on the solar path of the site. These strategies make the home a Passivhaus without conventional heating or cooling systems,” said Parades.

One system captures and filters water used in the shower and sinks and recycles it for toilet and irrigation purposes, while another tank catches and preserves rainwater in the summer for later use.

Endemic plants feature in the interior open-air patio, enhancing the house’s sustainable nature. The plants are mostly xerophile, meaning that they have the ability to grow in conditions with minimal water.

“The house has an introverted character, where each window is linked to the patio, the sky, or the treetops outside,” concluded Parades.

Other recent projects which showcase nets in their design include a netting-topped atrium in a home by Canadian studio Robitaille Curtis, and Divooe Zein Architects’ net-covered educational events space in Taiwan that was originally an abandoned house.

Photography is by FRAM Fotografía.