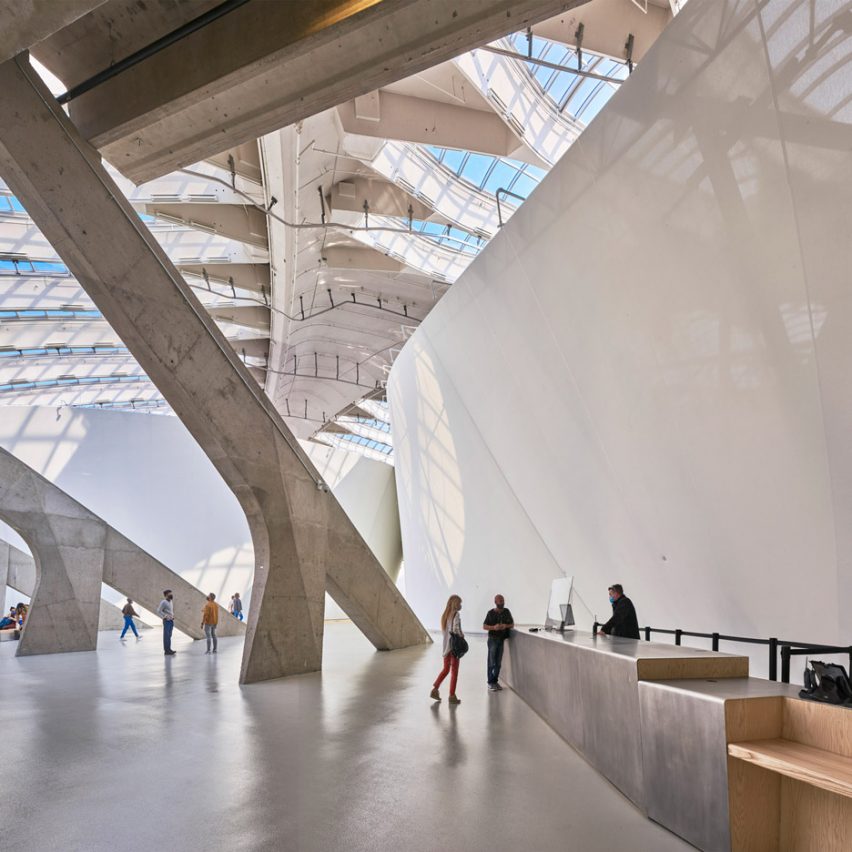 Architecture studio Kanva has redesigned the Montreal Biodome, a science museum in Canada, to reveal its original concrete arches and create new homes for its animal occupants.

The museum, which was originally an Olympic sports venue, contains four miniature ecosystems filled with plants and animals that visitors can walk through and explore.

Designed by French architect Roger Taillibert and completed in 1979, the domed structure was designed as a velodrome. In the late 80s work began on converting the building, and it reopened in 1992 as the Montreal Biodome.

Kanva won the competition to undertake the Biodome Migration project in 2014. Migration was chosen as the name to reflect the animals moving to new enclosures and symbolise the museum’s commitment to shifting attitudes around nature and climate change.

As part of the project, a four-metre-high clay cliff was built for macaws to nest in while a 15-metre-long ice tunnel was installed to create an immersive entryway for the arctic experience.

The complex renovation involved zip-lining fish over from pond to pond in pouches of water to clear the way for construction, while nine rope technicians rappelled down from the roof to install netting over the bird enclosures.

Kanva made the original roof a focal point of the revamp, removing a low ceiling insert and revealing the concrete vaults and the geometric roof glazing.

The reception hall is painted white to reflect the light from the roof and create a neutral space in between the ecosystem areas that occupy the majority of the building.

Walls of stretched white fabric divide this central lobby from the biodomes. As visitors pass between the fabric they can experience the smells, sounds and shifts in temperature before they see nature.

Kanva explained this partition system was informed by biophilia, a concept formed in 1984 by entomologist Edward O Wilson that theorises humans are soothed by the presence of nature.

Montreal Biodome’s ecosystems represent different types of terrain found across the Americas. The Tropical Rainforest is full of parrots, piranhas and poisonous tree frogs, while lynx roam the Laurentian Maple Forest that’s based on Quebec’s woodlands.

The Gulf of St Lawrence recreates the space where the Great Lakes meet the Atlantic Ocean. A mezzanine floor overlooks these three zones, accessible via a glass elevator. A bright yellow interactive display about nature occupies this level.

A two-metre-wide ice wall separates off an area designed to recreate the chillier Sub-Antarctic Islands and the Labrador Coast.

Kanva worked with employees at the City of Montreal to design the system, which chills aluminium coils filled with a chemical called glycol to minus eight degrees Celcius. This keeps a layer of ice up to 20 centimetres thick over the tunnel.

So as to not undermine the environmentally friendly ethos of the Montreal Biodome, the ice tunnel system runs off the excess energy created by the buildings geothermal energy system.

“The Biodome Migration could never have happened if everyone had worked in silos,” said Kanva project lead Rami Bebawi.

“The level of complexity of the existing context and the cohabitation with living species required the participation of all stakeholders to succeed,” added Bebawi.

For me, this high level of collaboration is a reflection of what we need to do to collectively address the environmental challenges facing humanity!”

Another challenge posed by the redesign was re-painting a 10-metre-high mural in the water tank of the Gulf of St. Lawrence.

The fish in this exhibit couldn’t be moved so instead of draining the tank, a team of divers was sent down to set up a scaffolding system to allow construction workers access.

Two textile meshes, each measuring 1.5 square kilometres laid out flat, needed to be draped over the top of the Laurentian Maple Forest and the Gulf of St. Lawrence, requiring the assistance of the rope team.

A clay cliff was built for a brand new exhibit containing macaws. A geologist, a tropical bird expert and construction contractors with a specialism in making fake backdrops were enlisted to make the setting look as realistic as possible.

Kanva is an architecture office based in Montreal.  The practice also created a facade of photoengraved concrete for a student housing block in the city.