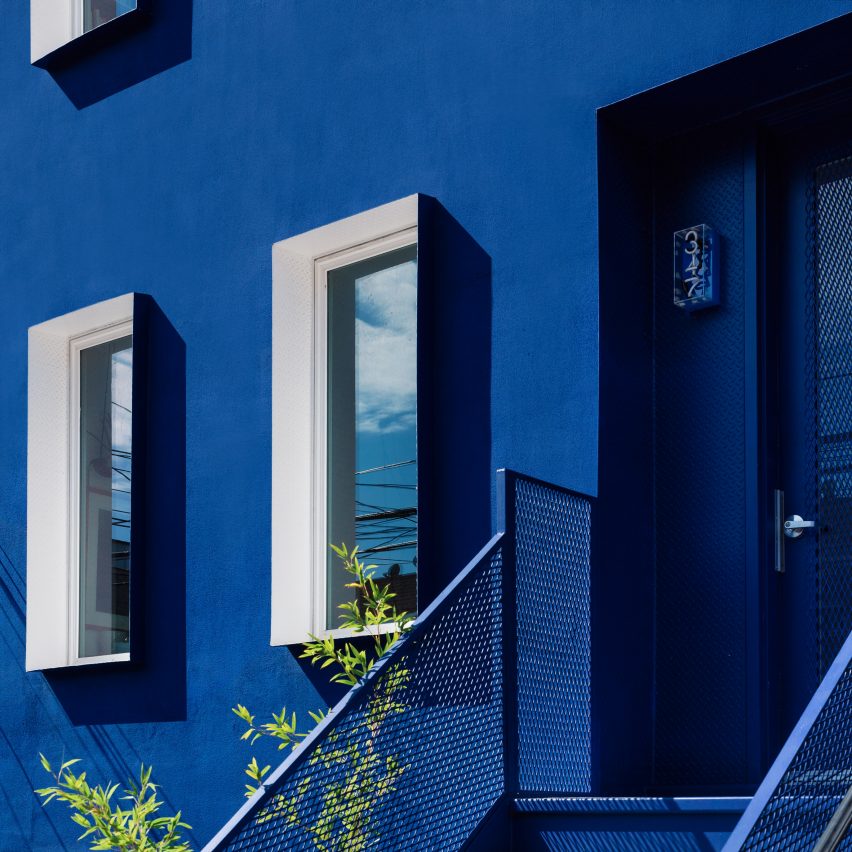 LOT Office for Architecture has designed a monochrome blue Brooklyn townhouse for a renovation project in the borough’s Bushwick neighbourhood.

The 100-year-old house, now called The Blue Building, stands out from the row of neutral-coloured buildings that make up the street on which it sits.

“The intention was that a bold monochromatic approach would create a new-building effect, almost making the building a stand-alone object,” said co-founder of LOT Office for Architecture Leonidas Trampoukis.

Despite its vivid colour, The Blue Building is a similar height to the neutral properties it sits between, boasting three storeys at a size of 3,000-square-feet (300-square-metres).

The building’s private garden is a large, light-coloured concrete patio that opens out at the back of the house. The patio is built around an existing magnolia tree that towers over the outdoor space.

A reflected corrugated material makes up the wall that separates The Blue Building from the surrounding properties. This material picks up and reflects the different colours that result from changing light throughout the day.

“We saw the work of renovating a townhouse in the same way that we would see an installation project,” Trampoukis told Dezeen.

“We worked with a singular gesture, and ideas of perception and illusion,” he continued, explaining the studio’s intentions behind the building’s monochrome blue, and its reflective garden walls.

In the middle of the patio, there is a standing outdoor curtain made from blue perforated aluminium, offering the house’s lower level some privacy.

Like its exterior, the inside of the building has been entirely renovated.

Narrow slated black hardwood floors contrast with bright white walls, with exposed brick where the original walls have been left on display.

The top floor features11-foot-high (4 metres) ceilings, large windows and skylights. Translucent polycarbonate panels are used as sliding doors that separate rooms, keeping the rooms bright and connected even when the doors are shut.

“The panels used as sliding partitions and room doors filter light with changing coloured hues throughout the day,” said Trampoukis.

The house’s windows are framed with metal extrusions that add a sense of depth to the building’s facade. Painted white on the inside, the extrusions reflect light back into the house, enhancing its bright atmosphere.

The project, named Formations, is an installation of curvy ultramarine-coloured seats at the entrance and garden patio of The Athens Conservatoire in Greece. LOT Office for Architecture was founded in 2012 by Leonidas Trampoukis and Eleni Petaloti.

Photography is by Brian W Ferry.