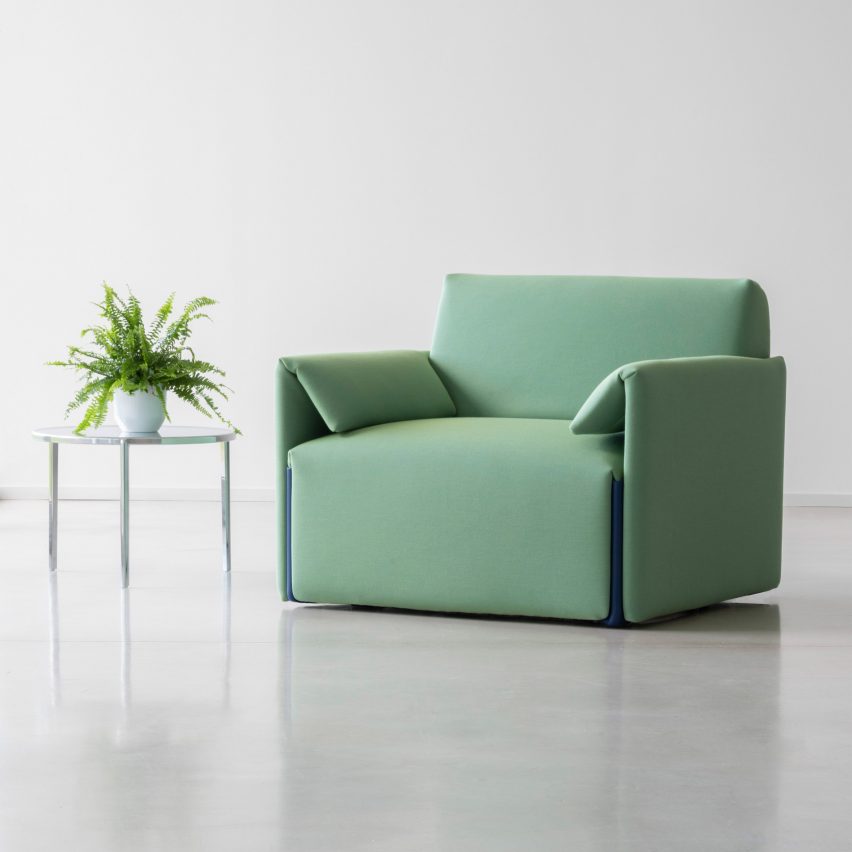 Stefan Diez discussed how the circular economy inspired the modular sofa he has designed for Magis in this live talk produced by Dezeen in collaboration with the Italian furniture brand.

The German designer was joined by Dezeen’s founder and editor-in-chief Marcus Fairs for an exclusive interview about his approach to designing the new sofa system, which is called Costume.

The design features four modules – a seating module, armrests and a pouf – that can be arranged in numerous configurations and joined together with colourful plastic connectors to suit the needs of the user.

Costume is intended as a departure from traditional sofa construction, which typically consists of a metal or wooden frame that houses an assemblage of belts, springs, foam and upholstery.

Unlike pre-existing sofa systems, which often fix these elements together permanently, Costume is described by Magis as “modular through and through” and is designed to be fully dismantled into its constituent parts.

In addition to improving its adaptability to different users and spaces, Diez created a sofa that is modular in order to make it more sustainable, as broken or worn-out parts can be replaced more easily.

Magis explained that in the spirit of the circular economy, the sofa is also made from recycled materials that could go on to be recycled at the end of their lifetime.

Diez is the founder of Munich design studio Diez Office, which he established in 2002.

He studied at the State Academy of Fine Arts in Stuttgart, Germany, under the tutelage of renowned German designer Richard Sapper, and worked for several years with fellow industrial designer Konstantin Grcic, who created the Bell Chair for Magis last year.

Diez has held teaching positions at such institutions as the Karlsruhe University of Arts ad Design, Germany, and the Lund School of Industrial Design in Sweden.

Since 2018, he has served as head of industrial design at the University of Applied Arts in Vienna, Austria. Diez has also collaborated with brands including porcelain specialists Rosenthal, Danish brand Hay and more, designing furniture, lighting and products.

This talk was produced by Dezeen for Magis, an Italian brand founded in 1976 that specialises in furniture design.